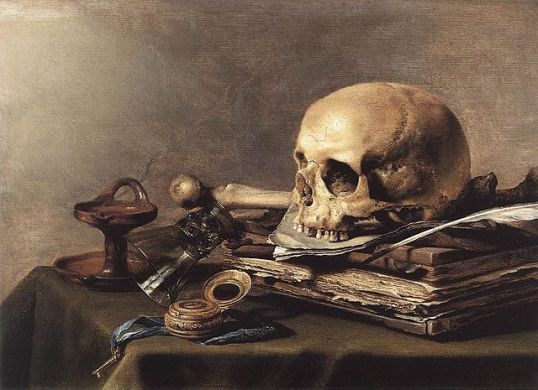 Denis Dutton in his book ‘The Art Instinct’ highlights the universal fact that human beings have a great admiration for the demonstration of skill and virtuosity. As he explains:

“Technical artistic skills are noticed in small-scale societies as well as developed civilisations, and where they are noticed they are universally admired. The admiration of skill is not just intellectual; skill exercised by writers, carvers, dancers, potters, composers, painters, pianists, singers, etc. can cause jaws to drop, hair to stand up on the back of the neck, and eyes to flood with tears.  The demonstration of skill is one of the most deeply moving and pleasurable aspects of art.”  (p53)

I suppose what is attractive is the recognition that the maker has achieved a high level of competence in their area of expertise. This is what is so appealing in seventeenth century Dutch ‘vanitas’ painting, as exemplified by my personal favourite, Pieter Claesz.  Although the general consensus of opinion still veers towards the idea that artists are born and not made, there is also an understanding that even when talent is natural, it takes the acquisition of skills, and the time and effort in which to develop them to a particularly accomplished level, to be successful and worthy of admiration.  Other makers within the artist’s own area of work recognise more than others the levels of skill that are displayed.  Painters can see whether a fellow painter is at the beginning of their journey, or whether they are accomplished. Painters, more than others, are able to make those judgements about other painters.

Which brings up the issue: who decides what is skilful? Who decides when a level of skill is outstanding or merely good? If you make a visit to room 62 of the National Gallery, you will come across this painting by Giovanni Bellini (1430-1516), made in 1501. Even to an unpractised eye, the exceptional levels of skill and virtuosity on display here is obvious to all.  It is therefore no surprise to find out that Bellini is considered to be the father of the Venetian Renaissance, and was an important teacher and influence on many other well-known Renaissance artists.

The National Gallery website explains, ‘Venice had a tradition of painting formal portraits of its rulers dressed in state robes. This work is painted in the style of the sculpted portrait busts popular at the time. These were often inspired by Roman sculpture. Bellini signed his name in its Latin form on the cartellino, or ‘small paper’, on the parapet. He was famous for his portraiture and helped make this art form especially popular in Venice.’  If you make the trip to the National Gallery to see the real thing, which I recommend, you will find yourself holding your breath as you study this stunning image. Yes, that is due to a recognition of, and an admiration for, the wonderful skill that Bellini possessed.

Dutton of course is not just confining himself to fine art in his observations. He goes on to say that not just the beautiful but any activity at all can be viewed by us with the same criteria, which involves an assessment of the level of skill involved.

“‘Guiness World Records’ is full of ‘world champions’ of the most mundane or whimsical activities; this attests to a universal impulse to turn almost anything human beings can do into an activity admired as much for its virtuosity as for its productive capacity.”

It is a deep-seated human tendency to value that which has taken skill to achieve, whatever that may be. But the questions remain: what is an acceptable level of skill, who decides what that is, and is it only physical virtuosity that plays a part in this assessment?  These questions are particularly pertinent to art.

For example, take the case of Picasso.

It is clear that there is a high degree of skill involved in this painting of his wife, Olga Picasso.  But having achieved these high levels, this artist is not satisfied with that achievement.  There is more to art than levels of skill.  Picasso wants to do something much more demanding.  Painting is not a hobby for him.  Rather, for him, painting is a way through which he wants to come to a better understanding of himself and of the world.

“I have never considered painting as a simple pleasurable art or distraction […], through my weapons of drawing and colour I have always wanted to further understanding of the world and mankind, so that this knowledge will free us a little more each day.” (statement to New Masses, 24 October 1944)

So it is not surprising that he is also capable of making portraits of women in a way that had not been seen before in the history of Western art.

This portrait of the weeping woman is particularly powerful, and its association with the Spanish civil war taking place at the time of its creation only adds to its power. Yet in many ways it is less aesthetically pleasing to many people than the portrait of his wife Olga.  Is it less skilful?  Is it easier to paint this kind of portrait?  Would this kind of portrait have been painted at all if Picasso hadn’t already achieved very high levels of representational competency with paint? Or are these the wrong kinds of questions to ask?  Picasso obviously felt that the drive to achieve practical competency with materials did not rank highly as motivation for making art.

“Everyone wants to understand art. Why don’t we try to understand the song of a bird? Why do we love the night, the flowers, everything around us, without trying to understand them? But in the case of a painting, people think they have to understand. If only they would realize above all that an artist works of necessity, that he himself is only an insignificant part of the world, and that no more importance should be attached to him than to plenty of other things which please us in the world though we can’t explain them; people who try to explain pictures are usually barking up the wrong tree.” – Picasso

To Picasso, as with Kandinsky, making paintings was a necessity rather than an option in life, and paintings themselves were not made to be scrutinised and rationalized away. Art has an innate mystery within it, and Picasso was very aware of it.

Kandinsky specifically attempted to get to grips with the mystery involved in art.  He devised a method of painting where each individual colour was assigned a spiritual significance.  As far as he was concerned, there was no need to focus on the demonstration of exceptional levels of skill and virtuosity, an attitude which predominates amongst artists today . Yet paintings that amaze and achieve great things are nonetheless still being made.  So I conclude, that for the artist, the whole issue of skill and virtuosity is secondary to other concerns, and highlights the possibility that archaeologists and artists view art differently.