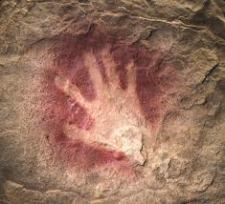 Where better to begin a discussion about art and archaeology than with Werner Herzog’s fascinating film ‘Cave of Forgotten Dreams’.  Released in 2010, this film was originally in 3D, which must have made the 32,000 year old art discovered in the Chauvet cave seem even more spectacular.  Alas, I have only seen the film in 2D, but it is an impressive achievement none the less.

The cave is like “the frozen flesh of a moment in time”, says Herzog, plainly captivated by the thought that intelligent man had stood in the same spot so many thousands of years before.  Carefully the film crew make their way along the wooden walkway into the darkness of the cave, with only limited equipment and lighting, restricted to the walkway itself in order to preserve the site in its original condition.

This need to treat the cave with as light a touch as possible has come about because of what has happened in similar caves, notably Lascaux, where it has been discovered that the vast quantities of modern human breath entering the depths of the cave has caused mould to start growing on the viewed walls, and this is endangering the preservation of the site.  I understand that if you want to go and visit Lascaux today, it will be a replica cave that you will enter, a copy of the real thing.  This virtual site had to be built because of the sheer number of visitors.  Which begs the question: why are we so keen to find out about our prehistoric world?  What is it that makes it so exciting to have a connectivity with people who lived thousands of years ago?  Is it to do with a need to discover our roots?  Is it a desire to feel that we are part of a much bigger picture as modern nuclear families shrink and fragment?  Or is it part of our search for meaning and purpose in our own lives?

The art itself is quite stunning in its execution.  The understanding the images reveal of the animal world pictured is striking, and the fact that these marvellous images were made in deeper parts of the cave, with difficult accessibility and in the pitch dark evoke a respect and admiration for these ancient artists.  Herzog describes the situation as being one of the emergence of a fully formed aesthetic sense:

“It was not a primitive beginning, or a slow evolution, it rather burst onto the scene like a sudden explosive event.  It is as if the modern human soul had awakened here.”

In other words, no scribblings have been found, no rough copies, sketches, or smaller pieces where the artist is trying out ideas or refining motor skills.  The only prehistoric art found so far has been one of great confidence and skill.  To Herzog, this expertise has burst into life without any warning of its coming.  Quite remarkable.

Almost as remarkable is the response of one of the scientists involved in the team that went with Herzog into the cave.  This Frenchman sees the main goal of his task as the creating of “stories about what could have happened in that cave in the past.”  He goes on to say

“we will never know … only create a representation of what exists today … a feeling of powerful things and deep things, a way to understand things which is not a direct way.”

In the light of the ongoing discussion in this blog about the polarities of the roles of artist and scientist, this scientist’s perceptions adds weight to the argument that we need to have a less harshly defined set of differences between the two.  This is a scientist working with an artist’s sensibility.  His awareness that it may be possible to reach an understanding of what is out of reach by an indirect look, out of the corner of the eye, rather by a direct gaze, is heartening for me as an artist.  Will this be the way in which I should consider my own practice as I seek to make work in the interface between art and archaeology?  Is there a way forward by looking out of the corner of my eye?  And is this a thought that applies to scientists as well as artists?  Would there be any scientists who would affirm the value of an indirect gaze?  Let me know!